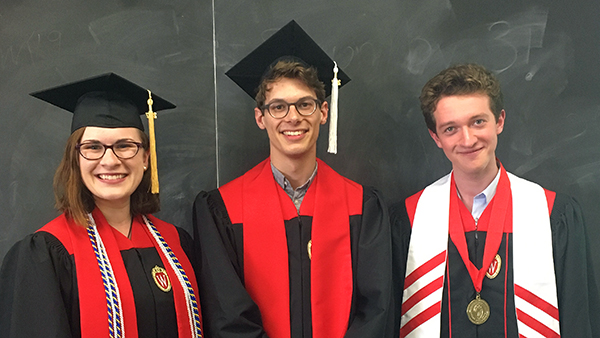 Thanks to generous donations to the Religious Studies Program Fund, RS presents annual awards to recognize the extraordinary work of graduating majors. This year, RS award recipients also received top awards in the College of Letters of Sciences.

Along with being an exceptional scholar, elected to Phi Beta Kappa and completing an honors thesis examining the “green burial” movement in Wisconsin, Becca Wanta (RS and Social Work) has been an exceptionally good citizen and representative of Religious Studies. She has served as a class peer mentor, written for previous newsletters, and helped spread the word about how Religious Studies can help prepare students for service especially in healthcare and allied fields. Becca held our first RS internship, working with the Wisconsin Medical Society for Honoring Choices Wisconsin, a program to educate faith communities about advance care planning. She has volunteered with several organizations that serve underserved and elder populations and make walking at night safe for students.

Becca is also the 2017 recipient of the College of Letters and Sciences Louise Troxell Award, which recognizes annually one outstanding woman in the College of Letters and Science whose qualifications include “intellectual ability and curiosity, good citizenship, appreciation of the world outside herself and interest in participating in its affairs.” We could not be prouder or more thrilled that Becca has been so deservedly recognized.

Page Bazan (RS and International Studies) was featured in the RS 2015 newsletter for his photo-essay exhibit on an RS service-learning course in Cambodia (Memorial Library 2015). Page’s creative expressions in RS have continued to impress. His thesis, “Selling Nothing: Marketing the Myths, Methods, and Movements of Minimalist Celebrities,” is a very original work demonstrating exceptional interpretative skills in examining contemporary myth-making, identity formation, aesthetics and marketing.

Sam Gee made waves in RS and across the College with his “double-honors” thesis (RS and History), “Scientific Salvation: Mystical Experience and the Psychology of Religion in America, 1880-1930,” exploring the origins of the psychology of religion. Its pioneers, most famously William James, experimented with novel methods of science to investigate the nature of religious experience, tending to view science itself as a way to access mystical experience. Sam’s thesis exhibits a rare ability to expose its subjects’ wrestlings and paradoxes clearly and empathetically. For those of us in Religious Studies, this probing work resounds in timely ways with our own scholarly struggles over definitions, disciplinary boundaries, and the quest to articulate a science of human experience.

History has awarded Sam the Butt-Smith Scholarship and Harrington Prize for best thesis. He also received the Undergraduate Library Research Award and Honorable Mention for the Iwanter Prize. Elected to Phi Beta Kappa in 2016, Sam is a recipient of the 2017 Dean’s Prize, awarded to the college’s most outstanding undergraduate scholars. RS is pleased to add to the accolades!

RS is proud of all our graduates.

From capstone explorations of changing evangelical attitudes about depression to holistic healthcare in India, our graduates have demonstrated growth, taught us as they learned and enriched our program and community. We look forward to seeing how they grow further and contribute farther as non-profit leaders, international educators, scientific researchers and more!